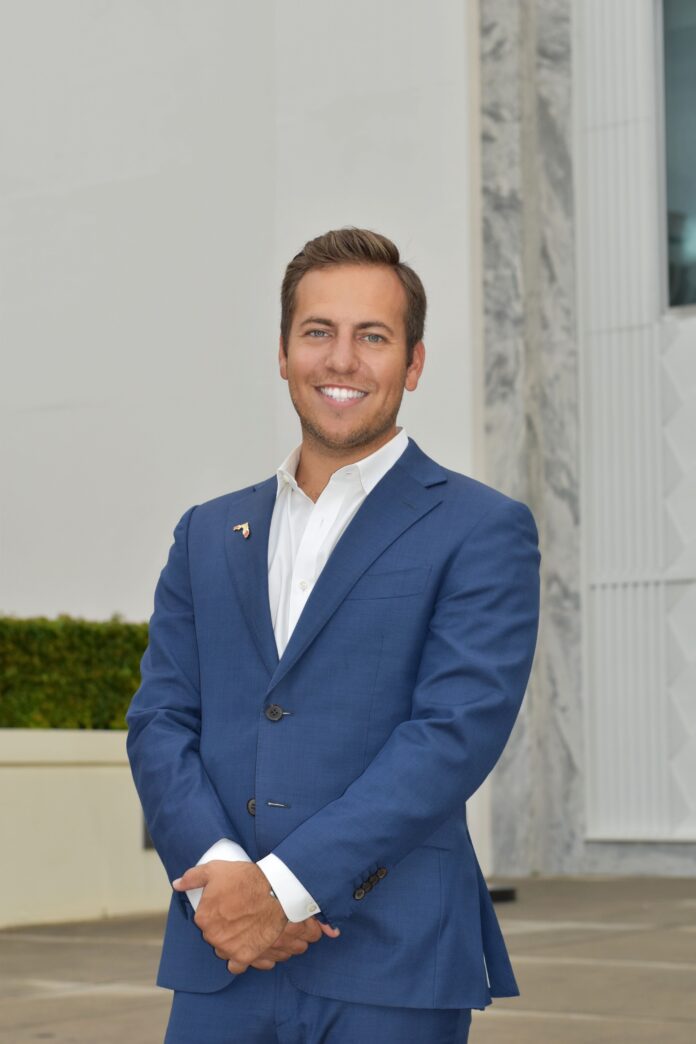 Jake Hoffman, CEO and Co-Founder of Invasion Digital Media is a thought leader, influencer, visionary, and successful entrepreneur. Jake provides the leadership and energy that has inspired the creation of successful business and real estate empire.

Jake Hoffman, the CEO and co-founder of Invasion Digital Media, is a political leader who has announced his candidacy for Florida State House. He is committed to making Florida and the United States the best possible places to live.

In 2013, he received separate undergraduate degrees in Political Science and Communication from the University of South Florida. The following year, he enrolled in a Master’s program in Entrepreneurship.

For the past three years, he has been leading Tampa Bay Young Republicans (TBYR) which he was able to grow to 300 members. It developed into an award-winning and internationally recognized organization after it started working on local political issues in Tampa. In 2020, TBYR was awarded Best Young Republican Club in U.S.

In addition, Jake also initiated the creation of a weekly conservative podcast. Called “Moderately Outraged,” it tackles relevant political issues affecting the country based on the perspective of young conservatives.

Jake and his fiancée, Michelle Sassouni, started the podcast early in 2020 when COVID-19 started causing economies to decline as many businesses and schools closed. They wanted to keep watch and update people about political issues that revolve around the implementation of restrictions and other policies against the spread of the disease. The informative show quickly gained traction on social media, gaining over 50 thousand views for each episode.

He is steadfast in his determination to combat lawmakers who push for excessive and unconstitutional COVID-19 rules that oppress people and force businesses to close. In this regard, he’s aiming to be elected to political office in Florida.

Furthermore, Jake is an advocate for encouraging the active involvement of the youth in politics. As such, he is a Turning Point USA ambassador. Aside from that, he is a candidate with Run GenZ, an organization that aims to assist and educate young political aspirants.

Alongside his political endeavors, he oversees Invasion as its CEO. This digital marketing company in Tampa, FL helps establish solid revenue streams for its clients like public figures, athletes, models, politicians, and more. Invasion creates digital media for its customers, such as ebooks, video courses, apps, and subscription websites, to make their social following profitable.

1. What has led you to become passionate about politics?

I started developing a strong passion for politics way back in college. After my internship with our local Hillsborough Board of County Commissioners, I continued my involvement in local politics and joined Tampa Bay Young Republicans (TBYR).

Shortly after I joined the club, I became president. From day 1, I made sure that we positively impact the community by going beyond the club’s main purpose. More than hosting events and putting up protests, we leveraged our social media presence to have a significant impact on Tampa Bay’s cultural fabric.

The pandemic’s effect on the lives of people in our community ignited my interest in becoming a public servant. I realized that most politicians don’t really listen to their constituents and they only start working after an issue has reached media outlets.

I want to fix this problem by closely engaging the public, listening to them, and then collaborating with all levels of government to ensure that everything will run smoothly for our future generations.

2. What accomplishments are you most proud of, so far?

I‘m very proud of leading TBYR to become not only an award-winning club but also an organization that has a significant impact on the political landscape and local culture of the Tampa Bay community.

I’m also very proud of all the people I’ve inspired to take action against the government’s overreach and for their desire to become involved in politics. I love that they now consider me as a resource that they can go to any time!

Another achievement that makes me extremely happy is setting up a local podcast called “Moderately Outraged” to inform and inspire people to take action against overreaching government policies. As a show that aims to instigate change by directly tackling relevant issues, we’ve worked tirelessly to empower our audience.

The amount of traction we gain with each episode is beyond what we expected, which motivates us to push harder for our goal.

3. What is one of the biggest challenges you’ve had to face in the past? What did you learn from it?

Personally, the pandemic was one of the biggest challenges I’ve faced so far.

I’m sure you’ve had experiences like this, just like I have. Cancelling my wedding twice was devastating to me. When they close down every gym in the country, my company revenues also significantly dropped overnight. And two years after, I’m still expected to wear a mask in most states despite poor data supporting such limitations.

It takes a tremendous amount of will to survive this wave. For me, on the other hand, I did not stop living my life despite what was going on in the world. When I’m unwell, I stay at home but never slow down, and I continue to live as though there is no pandemic.

The most important lesson I learned from this experience is to never put off your plans. When the pandemic hit, people all over the world were unprepared. They postponed weddings, having babies, changing jobs or careers, and so on because they were afraid of living their lives “when the time is right”.

If you’re passionate about something, it’s never about the right time to start. Things fall in place when we decide to take action. But if we don’t decide, we will become a victim of circumstances and complain that there is no perfect time for us to do what we want.

4. Why is it important for young people to enter political life and how can they get involved in the process?

There may be some young people who have been discouraged from getting involved in politics. But then, others who do engage don’t take it seriously or they just go through the motions and study politics as if it’s a school subject.

I realized that we need to communicate our thoughts and opinions more effectively and communicate with each other more often – especially with young people – so they can understand why politics is so important.

If you don’t get involved and fight for your rights, politicians will take them away from you as they please. So, I encourage young people to study the issues that concern them and their generation and then convince those around them to do something about it.

5. What makes a good leader?

A good leader is someone who can inspire others to take action and lead them in the direction of their goals. In order to do this effectively, one must maintain his integrity and authenticity, while holding on to his passion.

With integrity, you can expect others to trust and follow you. With authenticity, people will believe in the vision you spread and they’ll buy into what you do. And with passion, your team will always conduct themselves in a way that is inspiring and engaging.

6. What do you love most about leading other people?

I love the fact that I am able to pass on knowledge to young people. If I can guide them in the right direction, then I feel that my efforts are significant.

Because of this, I’ve been a member of Junior Achievement for the past several years since they provide me with the opportunity to go into classes every now and again to teach lessons directly from real-world entrepreneurs.

7. What made you decide to take on the role of leadership at TBYR?

The fact that I had to stand up for my rights at a young age made me realize how important it is to get involved in the local community. The time I spend with TBYR has taught me that you can make your entire community better if you know what you’re doing and are willing to put in the work.

8. What advice would you give to your younger self?

I would tell my younger self that I need to make sure I always keep my passion alive. When you’re passionate about something, you’ll never give up and nothing will stop you from achieving your goals.

9. What keeps you motivated?

The affirmation and outpouring support I receive from people who appreciate what I do for the state and country; the people who ask for my advice and feel they can rely on me; and all of the opportunities that come my way.

I’m always happy to receive emails from entrepreneurs asking me how I run things at TBYR and Invasion or to speak with college students thinking of becoming future leaders. It’s important for me to give back whatever I can to a great country like ours.

10. How do you feel about the future of America?

I love this country, which is why I make sure to give my all at TBYR and why I encourage young people to think differently about politics. Let’s prove those naysayers wrong! The best for our nation is yet to come.

11. What advice would you give young aspiring political leaders?

Don’t let anyone tell you that you’re too young to lead. If you really want to do something and it’s in line with your values, give it a try. You never know what might happen if you don’t make an effort.

I believe in America and I think we can all make a difference!

12. What is your favorite quote and why?

As Frank Zappa said, “You can’t be a real country unless you have a beer and an airline – it helps if you have some kind of a football team, or some nuclear weapons, but at the very least you need a beer.”

Behind this silly quote are larger geopolitical points. That is, one needs to be able to project power in the international arena. Otherwise, you can’t be taken seriously.

Jake Hoffman, thank you so much for participating in the DotCom Magazine Leader Roundtable Interview Series. We appreciate you participating in this important roundtable interview series, and helping our readers learn more about what it takes to build a great company and become a great leader. We wish you, your family, and of course your entire business, nothing but the best.

Easy Paths To Becoming A Data Engineer In 2021

How to Make a Stunning Visual Appearance of Your Business?