We’ve seen men’s dress shirts remain fairly stagnant for far too long. Yes, there have been new colors, new fabrics, and new printed patterns, but there has been little innovation to the design itself. When was the last time you or a loved one actually wore a tie? To many of us, it’s been a very long time.

As we enter a post-pandemic world, we know a few things; People are used to more comfort after working through a computer screen for the past 2 years. People are looking to express themselves in different ways and are being encouraged to do so. The older and more traditional norms are being replaced with more progressive ones. So… where does it go next?

Chad Heegaard is the founder of Cheegs, a Minneapolis-based men’s clothing brand whose mission is to modernize men’s dress shirts. Chad explained “By combining modern designs with the world’s most technical fabrics, Cheegs offers extraordinary dress shirts for men.” He went on to say “The world is ditching the collar and tie look. It’s just a matter of time.”
Before starting Cheegs, Chad saw the collared shirt and tie as impractical and uncomfortable. He noticed that people were leaning towards more casual outfits, but for whatever reason men stuck with the collar. Chad told us “For a while it was a personal style of mine and then all of a sudden I was in Los Angeles listening to Sara Blakely speak to 50,000 professionals about starting Spanx.

I was with 30,000 other men wearing collared shirts and it just clicked. That day I decided I was going to create a company that would focus on optimal comfort unrestricted by traditional norms. My first product was a collarless dress shirt with all the bells and whistles. We licensed technology to include NASA heat regulating technology, stain resistance, wrinkle resistance and a breathability that results in 48% reduction in perspiration.”

Cheegs launched on Kickstarter at the end of 2020, raising $40,000 to start the company. After a successful crowdfunding campaign, Cheegs was able to launch their e-commerce site in June, 2021. Since then they have sold over 1000 shirts around the world and have seen nothing but praise from customers. Although they are still small, Cheegs is thinking about the future of their company and will continue to offer incredible shirts. 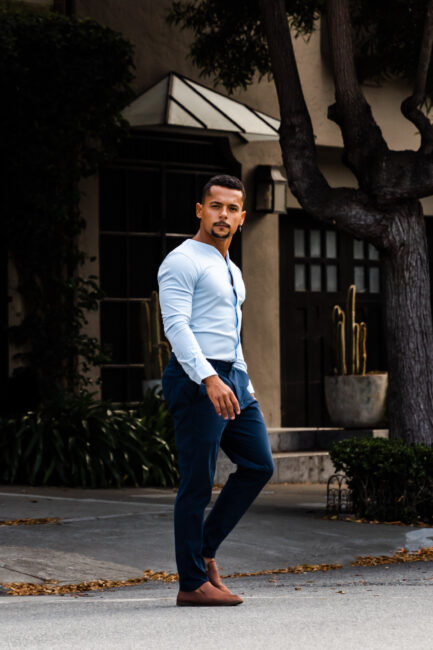 Chad finished by saying “I believe it’s the most comfortable dress shirt on the planet. And many others do too. You should see what our customers are saying about us!”

For those who wear collared shirts daily, would you consider giving the Cheegs collarless dress shirt a try?

Looking To Buy A Company Car? Take These Things Into Account

How To Create The Perfect Corporate Travel Program

How Does SMS Marketing Work And Why People Use It

4 Key Advantages Of Partnering With A Creative Agency

How Technology Can Be Used to Enhance Practical Science

Banks Need to React to The Growing Cost of Fraud and Take Action Now!